Hi All! I have wanted to do something fun with my bedroom for a while now and the Make it  Glow challenge provided me with a reason to do so. A few months ago I acquired a strand of GE-35 Color Effects lights and owing to the inherent dangers of controlling wall voltages, the strand provided me with an alternate and safe way to light up my room and be able to control it with my arduino. As I researched the hacks for the RGB strand I was taken with the idea of having the lights move with my music. I ordered a MSGEQ7 from Sparkfun and started my room’s renovation when it arrived in the mail. 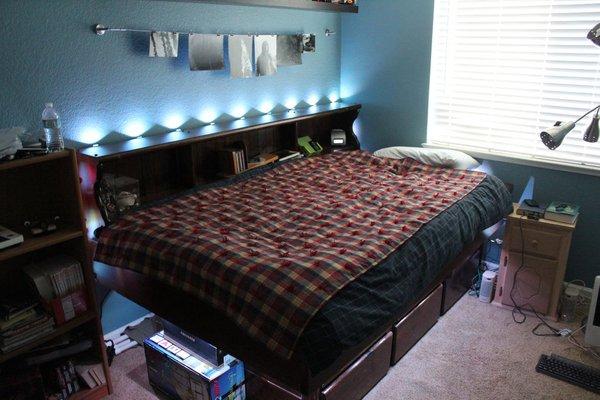 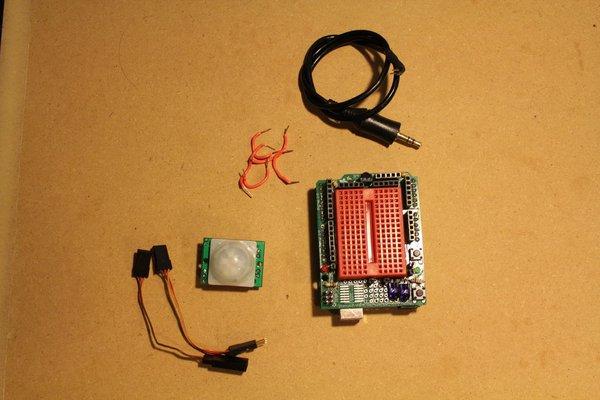 The first thing to do is to modify your lights so that they will work with the arduino. I chose to follow austinlightguy’s instructions on his website which worked well for me. You of course can do whatever you want, but make sure that the stock light controllers data line is not connected when your arduino is to the lights or you may end up frying something or getting interference between the two.

Step 3: Stapling Up the Strand

My bed overhangs the base all the way around and so I ended up just stapling the strand underneath my bed on that lip. I then took it and ran it up the side of my bed, along the top, down the other side, and along the headboard to completely encircle my bed frame. This will probably not apply to you so survey your room and try out different arrangements to find out what looks best for your layout. I ended up removing the diffuser bulb so that the strand had less of a profile above and below the bed. The bulb pops off with just a little force and twisting.

Step 4: Wiring Up the MSGEQ7 Chip

Pretty simple circuit, just follow these instructions to connect it up to the arduino. I used custom cut lengths of wire to  keep everything neat on the breadboard but whatever works for you. Pins used are the same as in the schematic below. I forgot to take a photo here so I am using one from later on so ignore everything else on the breadboard. Also I apologize for the 90° rotation, my computer is wigging out and won’t let me rotate it.

Again, very straight forward. Just 5v, ground and the data pin to pin 6 on the arduino. I also added the red LED on pin 13 and a button on pin 5 here. The LED is simply cut down so the leads are ~1/2″ and plugged in between pin 13 and the convenient ground right next to it. I am using the internal resistors in the Arduino so the button just needs to be connected to pin 5 and ground.

I decided to hide the ugly tangle of wires inside a book and also to protect the wiring so that nothing gets unplugged. I cut off the cover of the book and used a scroll saw to cut out compartments for the Arduino, PIR sensor, and music device. I used a knife to cut out the slots for wires to pass through so the book lays flat. Its kind of hard to see but the servo extension is routed through the middle of the pages. I also cut out a slot from the bottom half of the book to accommodate the programming cable that doubles as a power source. The PIR sensor is simply hot glued into place. I also wired up the two modified audio cables here, one for my hacked strand and one to the MSGEQ7 chip. I attached the audio cable from the MSGEQ7 chip to a splitter and used the other port for my speakers. I added a bit of double stick tape on the cover over where the switch is so that the switch is depressed when I push on the book. I also drilled a small hole over where the LED is so I can see it through the cover.

This is the most time consuming part of the whole build. I admittedly didn’t write all of the code but most of it is mine. I stole parts of the example code on this site as well as some of the example code from austinlightguy’s website and the doityourselfchristmas website (I couldn’t find the thread as the site is down right now). The rest of the code is 100% me and as such may be a bit convoluted. If you have any questions feel free to ask me. It currently has an auto off feature so the lights turn off after 15 minutes of no movement and a “reset” feature so if there is no movement detected for 20 minutes the function will change to white so when I walk in the room, I will be able to see. It has three functions, cycled through with the button, All white, All off, and color organ mode. Right now the color organ is simply blue but feel free to change it to be more interesting. When the PIR detects motion the red LED lights until the motion stops, I used it mostly for debugging but it is still a nice feature to have.

-Updated Code-
I got rid of the straight blue music visualizer in favor of mapping each channel to a different color (r g b) on the top of my bed and the bottom of my bed. Basically the “treble” frequencies are on the top of my bed and the “base” frequencies on the bottom. I also added a color changing visualizer for just one frequency on the top half of my bed. I will work on implementing the bottom here soon. I also added just a straight color cycling function that fades through almost all the possible colors.  Finally I worked out some timing issues with the auto off functions.

-Updated Code 12-1-2012
More improvements in the coding and functions. Designed and etched a custom board for the lights and stuffed it all into a radio shack box. There are provisions for two buttons in the code but I have yet to implement functions for the second button. I also took out the PIR functions but the custom board has a place for a PIR sensor and it wasn’t too hard to add that functionality. BRD and SCH files to come soon.

Here is the completed project as it stands now. I may decide to add a few more features as I begin to use it more, maybe a photo sensor on my window to inhibit it from turning on when it is too bright outside? Anyway, I hope you enjoyed this instructable and feel free to post any questions you may have, I will be happy to answer them.
[mom_video id=’4BVtQ9933Fk’]

I had some time over summer so I went ahead and made a board for my circuit and made it a little nicer than the jumble of wires on top of the protoshield. I added the 4066 chip in the schematic so that I could interface with a cheap push button iPod controller but I never got around to actually implementing that part. My eagle design skills at the point that I made this board were somewhat lacking but the circuit does work, just make sure to use a steady 5v power supply with the controller. All of the connectors are headers in the schematic as I was mounting it in a box and wasn’t sure where I was going to put things so I just soldered wires to the audio jack and buttons and such and then hot glued it all into the case. Its not pretty but as I said before it does work. There is some code for the board below. If you have any questions about this version, feel free to ask.

Currently I am working on a project for a DJ friend of mine which will consist of 3 boxes. Unfortunantly we could not afford individually addressable LEDs and so each box will only be able to be one color at a time. They will be individually controlled by an MSGEQ7 and an integrated Atmega328 with the arduino boot-loader sending out PWM to N-channel Mosfets.  I am using an RGB LED strip ordered from China, cut into 3 parts, one for each box. There will be a central controller with 4 wires going to each box, one for common power and 3 for Red, Green, and Blue control. Basically, to turn on a color, that colors wire is grounded which completes the circuit and turns on the LED.See http://learn.adafruit.com/rgb-led-strips for more information on how the strips work. More info to come as this project progresses into its final stages.