As a project for one of my college classes, we were asked to create something using the Arduino. After a few different ideas, I settled on putting an Arduino Noisy Jacket machine into a suit jacket. It uses parts of the jacket to make function, so that it appears that the jacket is making sounds for no reason.

The code that I used was from blinkyblinky, and can be found here. Using his project as the basis, its a simple matter of fitting everything into the jacket that you decide to use.

Rather than reinvent the wheel, I recommend you check out blinkyblinky’s Instructable  on how to put together and test out the noise machine. He also provides different codes, depending on the kind of sounds you want. Once you have it breadboarded and functioning the way you want it to, we can move on to applying it to the jacket. 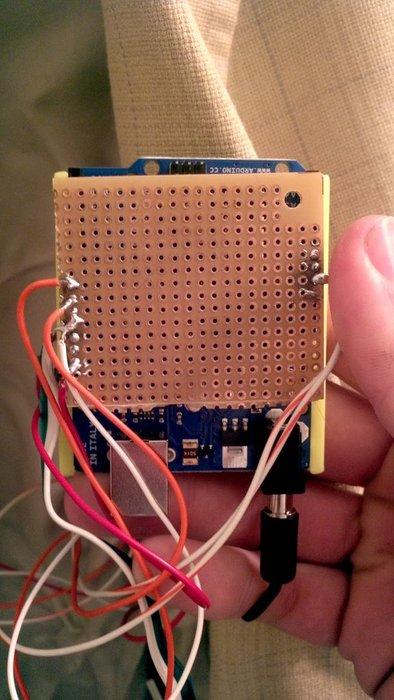 After you have breadboarded your synth to your liking (don’t worry, you can easily change the sounds on it), we will next prepare the Arduino to be put into the jacket. My instructor gave me an Arduino shield to place on the bottom, so I would recommend having something to protect it (shield or otherwise). For the I/O jacks, we need to make a perfboard. Its only necessary to have one that runs across the two sets of I/Os closest to the power jack and USB port. Cut one to the proper size by cutting along an edge you wish to break, then breaking it against a table. Then break out some headers that fit into the perfboard and fit into the Arduino. Although we are only using five I/Os, I recommend for the sake of stability to make them long enough to run through all of the I/Os. 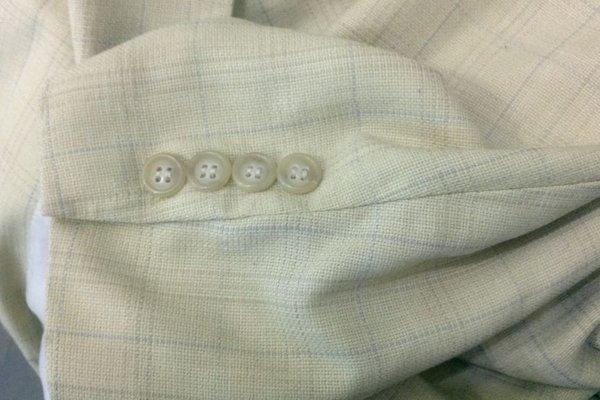 (Note: This step will may be very different for you than it was for me. This project is flexible in that you can choose any jacket to suit your needs, just keep in mind that it may make putting everything together more difficult. That said, I will continue discussing this step as if it were my jacket.)

Once we’ve found a home for the Arduino, we need to figure out where we will be placing our buttons. I chose to use small tactile switches that you would use for a breadboard because I had them lying around. The advantage is that since they have little legs on them, I was able to get them to grab the fabric on the inside of the jacket sleeves. Because of that, I could situate them under one of the buttons that were on the sleeve, which gave the illusion that pressing the jacket button changed the sound of the noise machine. I had people suggest putting them on the inside of the front pockets so that the sound can be changed while you walk with your hands in the pockets, which would make it much more incognito. I prefer the jacket buttons because I like to give form to parts of the jacket to make it much more inclusive to the whole experience. I also know little about tailoring, so I didn’t want to risk cutting holes into the jacket and having the thing fall apart.

You will also need to find a place for the speakers. Once you have laid everything out, we can move on to the next step. 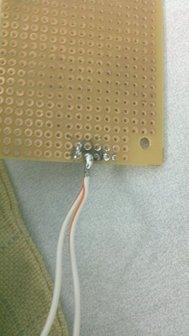 Now to install the noise machine. Measure out the length of wire you will need to get from the buttons and the speakers to the Arduino. Keep in mind to have enough slack so that you can, say, bend your arm, and it doesn’t restrict you or pull off the solder. You also don’t want too much length just to keep it manageable, but its better to cut off excess length from a wire that’s already soldered than to resolder the whole thing.

In this next step, you will be soldering to the tactile switch. Be very careful not to burn the fabric of the jacket. It is also important to know which of the four legs from the tactile switch to solder to. If you don’t know, have a multimeter and a third hand (such as from a friend) available as to find the correct legs with the switch pressed. Believe me, the noise machine is less impressive if the button is constantly on. Once you’ve figured that out, solder one wire to each of those legs. Connect one of them to header for Digital 8, and the other one (which goes to ground) leave aside. Do the same the same for the other tactile switch on the other sleeve (or wherever you chose to put it). Once that’s done, wrap the two wires that go to ground together and solder that the ground. It may be a little difficult, but I found this way to work best. Attaching one of the wires to the other ground that blinkyblinky did not use in his original plans grounded out the Arduino, which is the opposite of what we want. I don’t know how to write code, so I’m not sure how simple of a fix that is. But for the sake of using the resources we have in front of us, just wrap the two wires together.

We will need to do the same for the speakers. If your speakers already have wires connected to them, solder one to D10 and the other to D13. Connect the battery pack to the Arduino, I used a small slider button to use as a power switch that also has legs on it. This way, it can grab on to the fabric like the tactile buttons, and you totally look like your checking the inside of your jacket like a class person when you power the Arduino on or off.

Finally, use safety pins to keep the wires tidy and together. If you would like for a more permanent noise jacket, and have the skill, then you could also sew the wires against the jacket. It may even be possible to run the wires inside the jacket, but I’m not a tailor.

This semester at college, I am in a class called Computing and Craft which is about incorporating circuitry and micro-controllers and craft...