I wanted to create something for my wife as a present and this is what I came up with. This is a dark activated color changing night light. It has a sensor that can tell when the room light is turned off. This then will light a RGB LED and slowly fade through different colors. Its brains is a ATtiny85, but you could also use an Arduino.  We have little boys that would appreciate this on at night.

Parts for the Circuit:

Everything can bought at RadioShack but the ATtiny85.

Don’t buy the Wall Wort Plug. You or someone you know probably has one they don’t use, like the plug to charge a cell phone… When possible, recycle.

Parts for the Light:

There are many great sites and other instructables that give step by step instructions on how to program a ATtiny85 with a Arduino.You could just use the Arduino instead of the ATtiny85 if you like. You would just have to change the pin locations in the code.
The reason I used the ATtiny85 was because it is a cheap chip and I wanted the smaller form factor. The ATtiny85 can be programed on a shield if you have one or right on a breadboard.

int sensorPin = 3; // select the input pin for the ldr

unsigned int sensorValue = 0; // variable to store the value coming from the ldr 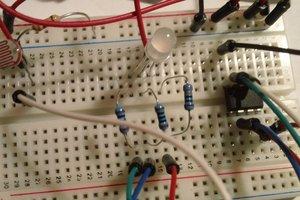 Now that your ATtiny85 is programed, I will describe how to make this circuit on a breadboard. You can view the pictures for clarification.

Now lets test it with the Wall Wort Plug.

Step 5: On to the Perfboard

Breadboards are great for testing and prototyping but we need a smaller form factor and something more permanent so lets now make the circuit on a perfboard.

When it is done you can test it in the block to see how it looks.

You can do this one of two ways.

Learn from my mistakes:
Do it slowly and don’t rush.  I tried to hurry and put to much paint on and it started to drip.  So I wiped it off which made it look worse.  It took a few coats of paint to cover it up.

Message or Drawing?
Once it is dry you can use a paint pen or sharpie to write on the frosted surface.  You may want to practice on paper of the same size first.  I wrote on one side only.  I should of had someone more artistic draw on mine, since I didn’t really like the look of my drawing, but there is the other blank side which looks nice.

Step 7: Finish It Up

Take your little circuit board and apply some hot glue on the corners.  Then moving quickly place it in the glass block.  Make sure it is centered and gently pull it back till the glue cools.  Then apply more hot glue around it along the edges just to make sure it is not going anywhere.  Hot glue does not conduct electricity so it is OK if you glue over the wires.

Set it in it’s stand, adjust the sensor, plug it in, shut off the room lights and enjoy your creation.

If you can’t seem to get it to work, it could be one of these things…

What is a LDR?

What is a LED?

What is a RGB LED?

Do you want more Geeks Videos or want ideas for projects?

If you like this Instructable please rate and vote for me in the contest at the top of the page.  Thank You.