This is my second instructable. I just had a mood of making a digital clock watch. But wanted to make it a learning process. I already had a sanguino i could have easily used that Atmega644 chip. it would have been more than enough digital clock.  But i wanted to try burning a Arduinobootloader and see if i could make it work. Well i did. I used a Atmega168 for this project.
I used 4 seven segment displays to display digital clock time in 24hr format. Here ii experimented with common anode and common cathode. Now i wanted to use other chips too and not just the Arduino which would have been the easier option. The chips i experimented with are 74LS47, 74HC154, 74HC595 ,4511 and  74HC139. The final compatible combination was common cathode with 4511 and 74HC139.

I used a RTC chip DS1307  to feed the time to the Arduino. I initially wanted to use millis() function in Arduino but it is not that accurate. Using RTC not only saved long coding but also has an added advantage of keeping the time in case the external supply is cutoff. It uses a 3v battery to do this.
Now I have used LEDs to point the time as minute and hour hands would do in an anolog clock. 60 Bi-coloured LEDs total which work on Charlieplexing.
Well if you are interested onwards you go.

I have made the circuit in Eagle but sadly I am not that proficient in using the software (Which is next on my “TO LEARN” list) so I didn’t make the board. I have attached the schematic i made on Eagle. U can use it to make the board.
I used Express PCB to create the PCB. I have also attached this .pcb file here. You can either print this file directly and make a pcb from a copper clad or build a board from Eagle and get it made professionally.

NOTE:
1) In express PCB file I’ve used JMP at some places. It means you have to use wires to short the two pads. This was necessary                   since i used a single sided PCB. Confirm where to connect wires from the circuit diagram.
2) At digital pin 0 and 1 i have used jumpers. This is VERY IMPORTANT as the LEDS have to be disconnected from these points as they are RX and TX pins. LEDs if connected while uploading the program will use up the voltage and hinder the uploading. I learnt it the hard way. So i made changes afterwards. So while uloading Remove the jumpers thus effectively disconnecting them from LEDs and replace them once the uploading is done. 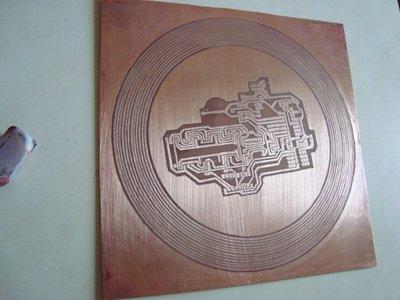 The PCB that i have built does not include the Charlieplexing LED circuitry. I made the 12 round tracks using a waterproof marker and compass.

IMPORTANT POINTS TO REMEMBER
1) The outermost track is 16cm in diameter.
2) The innermost track is about 12.5cm in diameter.
3) These diameter specifications you can vary as long as the total width of 12 concentric tracks does not exceed the length of the LED leads or you won’t be able to solder properly.
4) The actual placement of the LEDs was done manually i.e without the help of computer. I found it easier and faster.
5) Do not make any hole pads for the LEDs before etching. Just be sure to make the concentric tracks thick enough so after drilling they wont get disconnected completely.

Now etch the PCB. See the Image for what it should look like.

I decided to not to use LEDs to display seconds. So that means 60 LEDs for hour an 60 for minutes which round off to 120. Soldering so many would have been a pain in the ass. Luckily i stumbled upon Bi-colored LEDs with 2 and 3 pin. 2 pin ones were perfect for this application.
I learnt Charlieplexing from this site. It explained perfectly how it works.
http://pcbheaven.com/wikipages/Charlieplexing/

If you have bought a blank Atmega168 you need to burn the Arduino bootloader in it.
Follow this link to know how.
http://arduino.cc/en/Tutorial/ArduinoToBreadboard
I successfully did it using the internal 8Mhz process.

I have used the RTC module from here
http://learn.adafruit.com/ds1307-real-time-clock-breakout-board-kit/overview
You will have to add the library so read this site information properly

Now as for the program it is attached below for you to download.
there are two versions. I like the second one. the “Chime” looks better.
The explanation is provided in the program itself.
Remember you have to upload it twice because of the RTC. Once to set the time and then comment the line to stop it resetting at every arduino reset.
Feel free to ask any questions related to the program.

Cut the PCB in a perfect circle along the outer track leaving a gap of about 1mm. I got them cut from the same guy who cut the plexiglass for me.
Solder the components according to the circuit diagram.
Make the markings on the PCB to mark the minute places where the LEDs are to be soldered. I used a protractor. each minute is 6 degree apart.
From the previous step at 1st minute position will be (7-11) 2nd minute position will be (7-10). Go on soldering in reverse order.
Now connect wires from 0-11 digital pins to the concentric tracks. with Digital pin 0 to innermost track.
I’ve soldered two male headers on the back to apply 5v directly from an old cellphone charger. This is obviously optional.
I wanted to connect old cellphone battery and see how it works so I have made provisions to connect this battery on the back (optional). Although this was not a very good idea since the battery doesn’t last very long.
If you are using a 9 volt battery to power the clock u will need a battery holder. 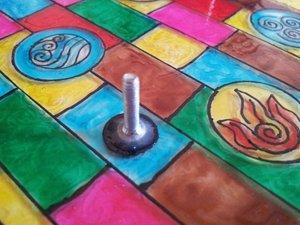 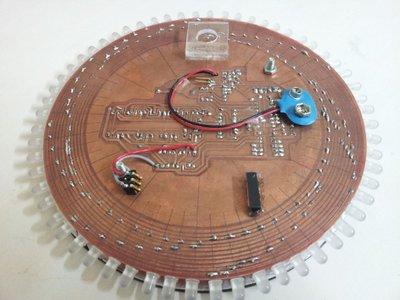 This is the decoration part.
I decided to use a circular Plexiglass plate 2mm in thicknessdiameter same as the PCB so that the LEDs stick out.
This was my first time glass painting and evidently i am not very good at it.
Go nuts while glass painting. Get multiple circular plexiglass plates so u can make more than one painting. You can change the front as per mood like halloween, christmas. You can even create a personal message and make it a birthday gift to some one.

Glue the bolts as seen in the pic and make holed in the PCB at their relevant position.
Cut a circular aluminium foil with same diameter as the Plexiglass and also two holes for the bolts. Be sure to cut a window in the foil for the 7 segment displays.Then glue this foil to the painting.
The purpose of the foil is to cover the circuitry which could be seen through the painting.
Fix the plexiglass to the PCB so that there is no space between Plexiglass and 7 segment displays.

I couldn’t find a proper hook to hang the clock by a nail so i made one from plexiglass pieces. It didn’t have to look perfect. If would not be seen anyways.

I WOULD LOVE TO HEAR FROM YOU. ANY SUGGESTIONS, CHANGES ARE WELCOME. POINT OUT THE FAULTS IF ANY I WON’T MIND. HEY! I AM LEARNING TOO. THERE IS A LOT OF ROOM FOR IMPROVEMENT. ESPECIALLY IN THE PROGRAMMING DEPARTMENT. PLEASE POST THE PICS OF THE ONE YOU HAVE MADE. I WOULD LOVE TO SEE THEM.